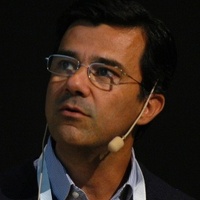 Marcello Pelillo is a Professor of Computer Science at the University of Venice, Italy, where he directs the European Centre for Living Technology and leads the Computer Vision and Pattern Recognition group, which he founded in 1995. He held visiting research positions at Yale University (USA), McGill University (Canada), the University of Vienna (Austria), York University (UK), the University College London (UK), and the National ICT Australia (NICTA) (Australia). He serves (or has served) on the editorial boards of IEEE Transactions on Pattern Analysis and Machine Intelligence, IET Computer Vision, Pattern Recognition, Brain Informatics, and is on the advisory board of the International Journal of Machine Learning and Cybernetics. He has initiated several conferences series as Program Chair (EMMCVPR, IWCV, SIMBAD) and will serve as a General Chair for ICCV 2017. He is (or has been) scientific coordinator of several research projects, including SIMBAD, a highly successful EU-FP7 project devoted to similarity-based pattern analysis and recognition.